Well, witchery, sorcery, or just plain strangeness can describe the weather the past few weeks. We have had rain, a bit of snow, high winds, lots of overcast, and actually a bit of warmth and sun. With the days becoming so much shorter, for activity purposes, we have tried to take advantage of whatever Mother Nature has thrown at us.

We hiked the Toll Road, in remnants of foliage, and a drizzly sky…. 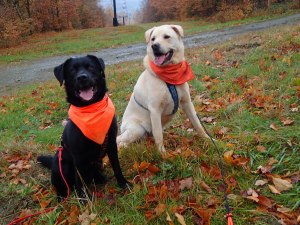 I had Gryphon walk across the new bridge for the Long Trail crossing over the Winooski River…the footing was definitely a bit different for him, but he actually showed no hesitation…. 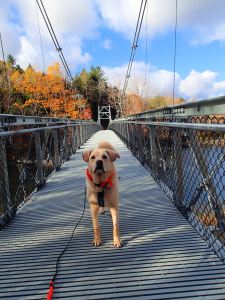 I explored an area of conserved land, administered by one of the local colleges. It is quite remote, and it was fun to explore the trails, cabins, and Ritterbush Pond ( we had hiked the other side of this area, when we hiked to Devil’s Gulch). We noted some ice coating the small ponds, where the sun had yet to peak through the trees. I know we will return here for some fine snowshoeing. 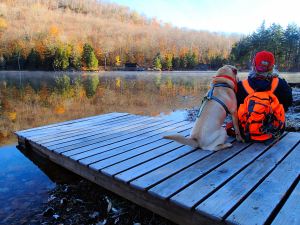 Both dogs have had the opportunity to explore our local trails…much more peaceful now, since most tourists have departed for points south. We’ve been up the toll road a few more times, since it is a nice hike when the real trails are very wet and slick. The last time we went up, and we reached the Mountain Chapel, the winds were gusting up to 70 mph…at that point we decided we had gone far enough! We’ve also been out to our network of trails where , as members of the “Poo Crew”, we will once again monitor folks’ compliance with Leave No Trace principles. 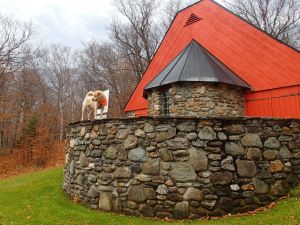 At the stone chapel on the Toll Road 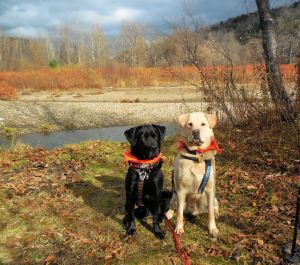 A hike for Edgar’s 4th Birthday!

We spent Halloween Day hiking a small section of the Appalachian Trail in NH….it was fun to get up to the South Peak of Moose Mountain, where we could overlook some of our previous paddling destinations. We were also scouting this trail for snowshoeing potential…I think it will be a great winter trail! 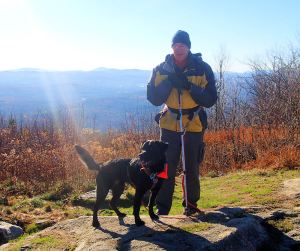 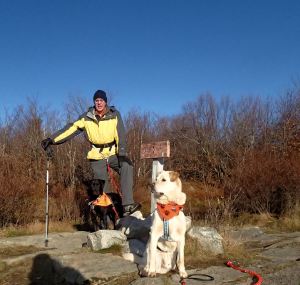 On a particularly cool, dreary morning, we took the dogs out for some bikejoring. This was Edgar’s first run of the season, and he did a remarkable job! 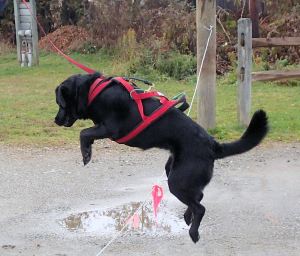 Leaping over the cable gate, to get into the access road area…for bikejoring!

Amongst all this hiking, we had a very unusual interlude…record high temperatures ( up to 70 degrees) in early November, and water temperatures still in the low 50’s, meant that we were able to take the boats out, for another “last paddle”

It was absolutely amazing, to be paddling in November, in short sleeves, on mirror-glass water…and no one else on the 800 acres of the reservoir. We spent a few hours on the water, stopped to let the dogs run around on the closed state park beach…and were really hesitant to actually take out. It was so nice, I actually took Gryphon back out the next day…and our day was equally as pleasant. I was truly sad when I paddled to the shore for the last (definitely, now) time in 2015. 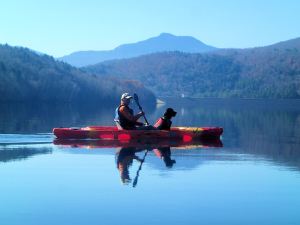 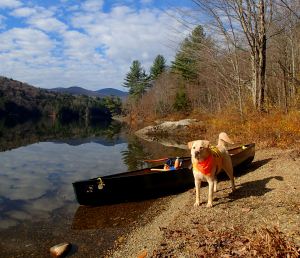 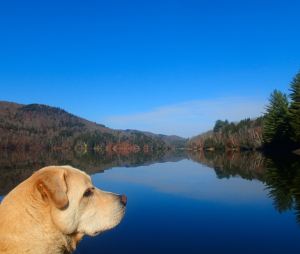 We headed out last weekend to hike Mt. Elmore, one of my “regular” destinations, but one which must be avoided during crowded times. We hit the trail just before 8am, and though we were prepared for some snow or ice on the trails, we actually had pretty smooth sailing. We encountered only 2 other hikers, until we were just about back at the trailhead. By that time, many folks were taking advantage of the cool, sunny day, to head up and take in the views. Most of the dogs we ran into had pretty good trail manners. However, one young black dog ( off leash, of course), ran right up to Griff, around his legs, under his legs, and between me and Griff as I held onto his harness. The owner, 50-75 yards away, obviously had no control over the dog. I finally had to push the dog away with the grip end of my trekking pole, and firmly tell it “go home!”, and “get off the couch”….someone told me once that if a dog chases you on a bike, that latter command often gets the dogs attention! I kept my cool, and said nothing to the owner. The dog is not the one responsible for his poor trail etiquette, and I think the owner got the message. 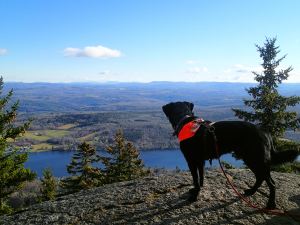 Edgar is NOT the black dog that harassed Griff! 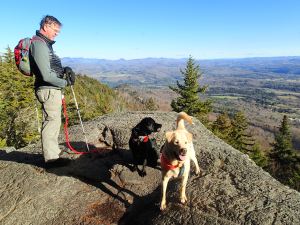 So we are anxiously awaiting some real snow! I received some amazing gear from Tubbs Snowshoes , as part of my position as a Tubbs Ambassador. I have also submitted a few blog entries, and when those entries are published on the Tubbs site, I will share the links here. I also have set up a facebook page called “Snowshoeing with Your Dog” found at https://www.facebook.com/groups/154720891546730/ since no such page existed previously. Since so many of the folks from the hiking dog facebook groups also snowshoe, I thought it might be fun to share our winter-specific photos and tales .

Be sure to check out the Tubbs facebook page https://www.facebook.com/TubbsSnowshoes…there is a remarkable group of Ambassadors, from all over North America. Great articles, photos, and stories are being posted by this Ambassador team. 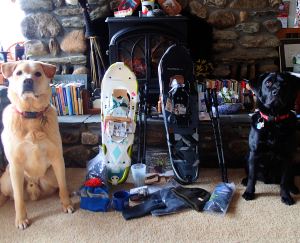 Though we are anxious to get out on the snowshoes, the snow has just not yet arrived in sufficient quantity…however, this weekend, we did get a few inches of snow, and high winds, up in Smugglers Notch. The road will probably open again for traffic, before closing for the season, since we are getting warmer weather in the upcoming week. But it was great fun to spend the day hiking up the icy trails, with blowing winds and snow, and the MicroSpikes providing the required traction. Soon enough, the trails will be solid white, and our paddle pups can once again become powder pups! 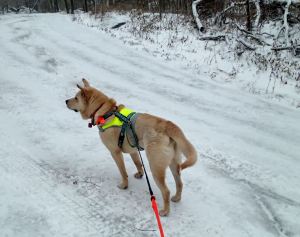 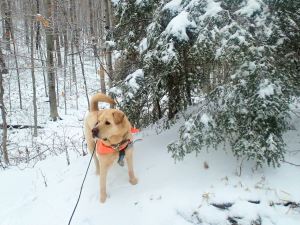 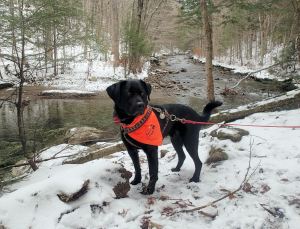 So our blog has officially transitioned into winter activities….we have some upcoming “camping” in remote off-the-grid cabins, hopefully providing a chance to give our snowshoes a good back-country test. Once Ryder Book has enough snow to groom some trails, we’ll be out skijoring and kicksledding. We are actually looking forward to winter….we’ll be actively enjoying our great natural area, and sharing some of our exploits. Ta på snø!  (Bring on the snow!)