Well, actually we were pretty mellow, enjoying the peace and quiet of the woods of the Northeast Kingdom of Vermont, as the new snow fell gently upon the existing foot of fresh powder. So why have I suggested in the title of this article that we “raised a raquette” ?  We did raise a raquette, but not in the usual sense. We took our raquettes into the wooded trails of the local mountains and ponds, to welcome in 2017 with an outdoor adventure.

Living as close to the Canadian ( Quebec) border as we do, we frequently  participate in outdoor activities north of the border, and follow many outdoor sites based in Quebec. From these sites we learned that in the French language of Quebec, snowshoes are known as raquettes….hence, our appropriation of the term!

Rather than spend the holiday weekend surrounded by noisy,  robust, and loud partiers, my husband and I decided to head to the mountains for the weekend. We were fortunate enough to be able to rent an off-grid Wheeler Pond cabin owned by the Green Mountain Club, located on the pond at the base of mountains with an endless variety of hiking and snowshoeing terrain. We are members of the GMC, Northeast Kingdom Section, and have stayed here many times before. Unfortunately, last winter, our attempts at snowshoeing weekends were major “fails”…the snow-less winter of 2015-16 had us do lots of ice-spiking and hiking around the cabin, but our snowshoe never left our vehicle. This year was different! December 2016 has been marked by nearly normal snowfall, and in the Kingdom, about 90 minutes northeast of us, there is always more snow. We also relish the chance to get out to some more remote ,less frequented, hiking destinations than are found in other areas of Vermont. 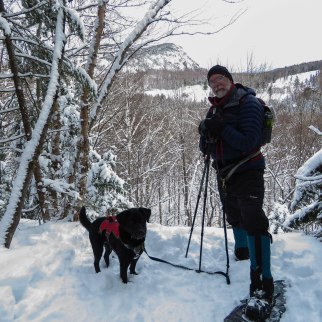 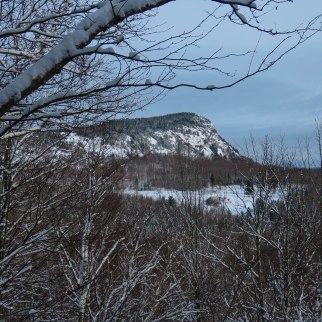 In addition to all our camping  gear, we each packed up two pair of Tubbs snowshoes, not exactly sure of what conditions we may find. We knew there would be snow, but we wanted to be prepared for any trail conditions, from packed and icy, to deep and fluffy. Our Tubbs framed snowshoes ( Wilderness 36’s  and Mountaineer 25’s) would provide us with a bit more flotation if needed, while still giving us a solid traction base.  Our Flex Alps are excellent for the often varied, and difficult, Vermont conditions we encounter on some of the area trails, so they came along, too. It was a pleasant addition to have my sister-in-law join us, with her more vintage Tubbs snowshoes. And of course, our two lab mutts, our regular adventure partners, were also with us. We arrived at the cabin’s location, in Barton, VT, early morning, ready to hit the trails before worsening conditions predicted by a winter weather advisory kicked in. We had a nice chat with the folks who were staying in the cabin before us, and they assured us they would vacate the cabin by noon, and that it would be left clean and spiffy for us. Nice folks!

Parking ¼ mile from the cabin, we geared up and headed up one of the many trails that are literally right out the door of the cabin. We headed up the newly rerouted Wheeler Mt. trail and found deep untracked powder, the perfect chance for my husband to initiate his Tubbs Wilderness 36’s. I used my Mountaineer 25’s, and they worked out great in these conditions.  The narrow wooded trail wound through the trees, and around snow covered boulders that looked like giant marshmallows. The dogs picked up on lots of wildlife sign, but the only living animal we saw was a partridge, flushed from a low pine bush by Gryphon…it flew away in quite a huff! The predicted overcast and snowy weather did not materialize, and we enjoyed blue skies, bright sun, and fabulous views. 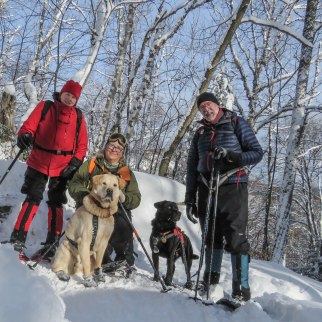 My husband had no trouble negotiating the winding narrow trail with his large edition snowshoes…he even found some open areas to stomp through, much to the delight of his snow dog Edgar. Each of us found that our Tubbs provided nice flotation on the powder, yet provided great traction on the steep sections we had to climb.

We traveled for a few hours, and then took a break for hot lunch on the trail. We decided to skip the planned big lunch, and have just hot beverages and snacks instead, perfect energy boosts for the return trip.

By early afternoon, we were ready to get to the cabin. Now, each of us has a lot of experience in winter tent camping and backpacking, and there is a special attraction to that outdoor pursuit. However, as we get a bit older, the appeal of a cabin, however rustic it may be, increases. In fact, winter hut, yurt, and cabin camping has become quite popular with many folks. Some locations require backpacking, or hauling gear by pulk, while others have short equipment carries to the enclosures. Our delightful little cabin is only a few hundred yards from the parking area.  This makes it especially attractive for families, older folks, or those without the desire to really “rough it”.

We loaded our gear into our homemade pulk, and hauled it off to the cabin. Our five pairs of Tubbs snowshoes were placed outside the cabin, near the frozen lake, ready to go; there are 4 trails that are accessible right from the cabin.  My husband got the wood stove fired up, since that is the only source of heat. There is no electricity, running water, internet, or cell phone coverage here, and the bunks are nice flat plywood. The cabin is a bit rough, but it feels like a second home to us, and to our dogs, who settled right in. Some hut/cabin camping locations prohibit dogs…since our dogs accompany us on all our adventures, the dog friendly nature of this cabin makes it just right for us.

Late afternoon, as the skies began to cloud up and darken a bit, we made a nice fire in the outside fire pit. The snow then began to fall, gently upon us, as the temperatures hovered around a very acceptable 20 degrees (f).  Who needs Times Square, when you can be sitting around a fire, miles from the nearest civilization, enjoying the peace and quiet of northern Vermont? 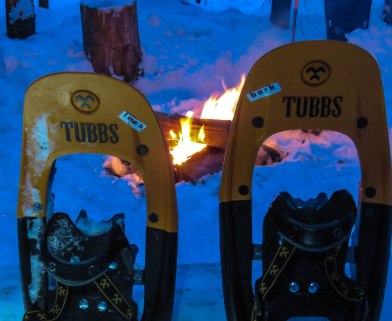 Our evening celebratory meal was fondue, heated up on a camp stove. Of course we had the obligatory toast, from a bottle of champagne that had been kept chilled in the snow. We had brought only two camping “fancy” glasses, so my Tubbs camping mug became the third entry into the toast…how delightful it was, to raise a glass of bubbly among close family, in that setting. We did not, however, make it until midnight; early to bed were we, as we had more snowshoeing planned for the morning. 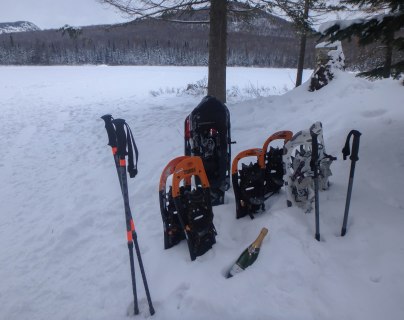 Outside, the snow continued to fall, and by looking upward, my headlamp illuminated a kaleidoscope of flakes…and not a sound other than my feet on the soft snow. I knew that the next day, the first of 2017, would bring us more great snowshoeing conditions.

Indeed, 2017 greeted us with a few more inches of snow, and moderate temperatures. Our dogs awoke at their usual 6 am time, well before any light was visible in the eastern sky.  The early rising time left us plenty of opportunity to make a nice breakfast to have on this holiday morning…not the usual quickie oatmeal and dried fruit we have while tent camping, but rather a nice spread of scrambled eggs, bacon, and maple donuts. Fully energized, we were ready to take advantage of the new snow, and head out on the short trail that goes around the lake. My sister in law decided to spend the morning drinking hot coffee and catching up on some reading, so it was my husband and me, and our two dogs, that went out to welcome the new year with a snowshoe trek. Having hiked this trail previously on wet leaves, rock, and ice, we knew it had a few tricky spots to negotiate…nothing steep or really challenging, but we decided our Flex Alps would be the best choice for this trip. And they were…we had deep untracked snow, often 20 inches deep, but also some narrow and windy passages around rocks and trees. We encountered a log bridge, 25 feet long, covered in snow, making determining the location of the log a bit uncertain. Our snowshoes provide a good stable base, and solid traction, as we slowly worked our way across. The rest of the trail obstacles were no match for our snowshoes, and we reached the end of the trail, with our cabin in sight.  One last challenge….this trail has a sometimes sketchy brook crossing at one end, consisting of ice covered rocks, with a foot of snow on top; neither of us wanted to start the new year with a dip in the frigid water. We opted to cross what is essentially an old beaver dam; unhooking our pack straps, we slowly stepped across the 20 foot distance, feeling secure with the base of support provided by our snowshoes. The dogs led the way, and once across, they received a nice doggie treat! 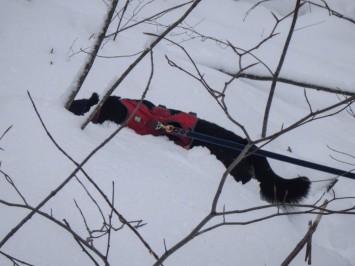 We took advantage of the snowy trails around the cabin to let my sister-in-law try out our newer version Tubbs Snowshoes. She absolutely loved the Flex Alps, and will most likely own a new pair before our next joint outing!

This trip was an exceptional way to ring in the New Year! I wish that every holiday celebration could be as peaceful and relaxing…maybe next year, we can get our adult children to join us. After all, the cabin does sleep 6.

If you are interested in hiking the Northeast Kingdom of Vermont, the Green Mountain Club  https://www.greenmountainclub.org/    has all the information you need, from guidebooks, maps, and information on renting the Wheeler Pond cabins. In March, we will be back here, hoping to take advantage of some spring conditions up on Moose Mountain, another trail that begins near the cabin. There is a great variety of trails in this section of Vermont, many within 30 minutes or so from Wheeler Pond. The winter of 2016-17 appears to have the potential to be one of the best snowshoeing seasons in a long time!